This is my 2008's thanks:
-mother nature- sun in November is awesome
-we the people- Obama
-ma, pa, Kris and the rest of the fam
-Kathy Griffin- you make Palin fun...or funny...or make fun of her. D) All of the above, final answer.
-UW teams that win
-Scinnomon Ladypants
-friends, friends, friends and friends
-Mini Vans
-Ms. Keys
-Vegas' most awesome married ladies
-Top Shop...it makes Cori smile. Among other things, cough cough, carmy
-the one and only, Tommie Girl
-Americanos with eggnog
-sister's heart
-advances in medicine
-Coldplay's lyrics
-my round feet
-the peeps at my j.o.b.
-buddabye
-my mom's awesomeness at Cranium. Square, square, square.....rectangle.
-homes with two rooms
-Tina Fey
-February 1st, 2008
-JoeJoe's kitchen masterpieces

It's not just the leaves that are a CHANGING

Welp my friends...just when I think I am going to get more consistent with this blogging thing, I fall off the map :)

The last couple of weeks have been pretty hectic...between all the election hype, work, searching for the perfect house and trying to keep my house clean, I haven't had a second to update the good old blog. But now that a counter has been added to it, I do see that people actually look at this thing. So let me fill you in on what's been going on in my world.

The day before Halloween I found out some terrible news...a good friend of mine, Michelle French, we call her Frenchie, was diagnosed with non-hodkins lymphoma. O 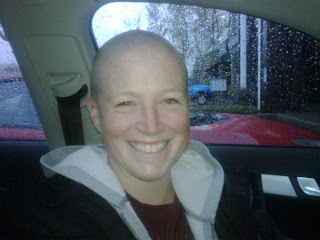 f course all of the whys, how comes and why I outta's ran through my brain but then I remembered the how unlucky this specific disease was. It struck the wrong person...Frenchie is probably one of the hardest workers and most positive people I know. I can honestly say that I have never seen her frown. Even when shaving her hair off she had a huge smile on her face. She is amazing and an amazing inspiration. So that was my end to October...good riddance.

November started with a bang...a bang by the name of Obama! I am so happy that I do not have to hear another campaign commercial for a few years. Even happier that my ballot mimicked the results. I was pretty sure I was going to need to join one of my friends overseas until times got better. After looking at cnn.com throughout the day to see if I could catch a hint of a democratic lead, I finally started to hear great reports as I was catching the first UW women's exhibition game. I am pretty sure I cheered the loudest when I heard that Obama took Virginia and Florida. I hurried home after an exciting second half (or last 5 minutes and OT) and waited until Jessica got home so we could join the masses and celebrate in the streets. Mobs of people had many intersections of Broadway blocked off as they celebrated Change and diversity. It was an amazing thing to be apart of....people celebrating in the streets and the police sitting back, taking pictures and enjoying the beginning of a new era. YES WE CAN! 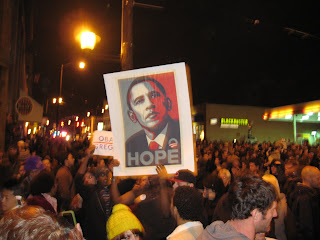 Last week was topped of with an amazing performance by Brett Dennen. If you haven't heard of him, take it fro 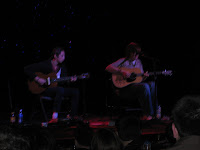 m me, check him out. I was introduced to him by Jessica and Keeler...both of them raved about this "pacific northwest, Jack Johnson-ish" singer. Watching him live at the Triple Door was a great way to get over the usual Wednesday/Hump Day blues.

Pretty much everything after that is boring. I am excited to report that I soon will be moving out of my small little coop and into a new house. My parents are selling the last of the South Dakota fields and investing in a rental house. Thankfully I will get to benefit on that and move into a place with a little more space. SO, if you know of anyone who would like to by an awesome studio in an upbeat and ever-changing neighborhood, tell them to give me a shout.