one hell of a day! LOVE

wow.
i can't explain how much LOVE i felt throughout the ring around the needle 2011. 594 participants circled the needle to raise money for the Melissa Erickson Foundation. it was an incredible day for all involved. lots of beer, hugs and an old fashioned good time. i'll leave you with some of my favorite pictures. 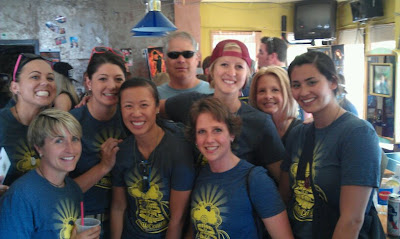 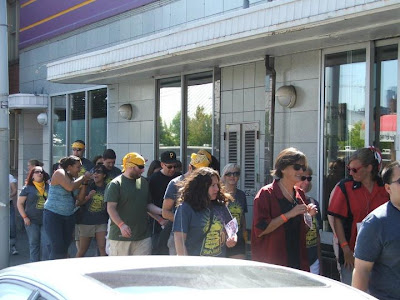 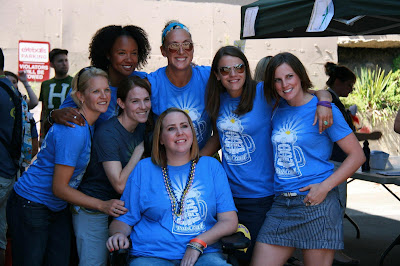 Team Mo - there isn't much that these ladies can't do.
LOVE 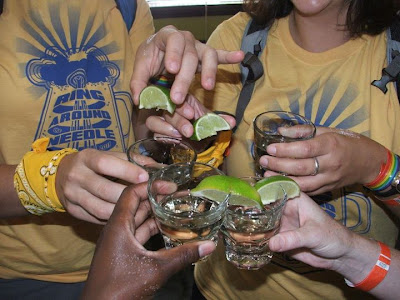 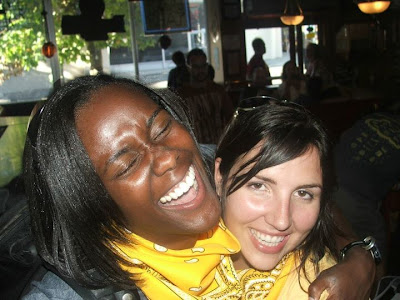 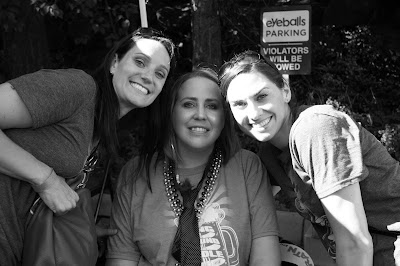 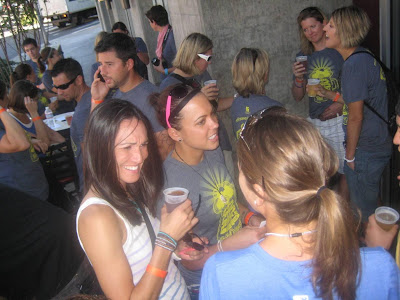 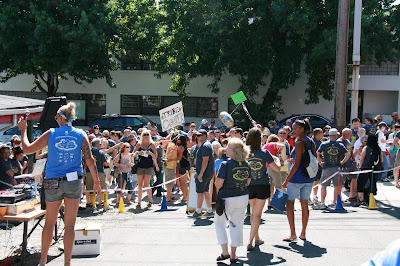 all these people in one place for lil old me...
LOVE! 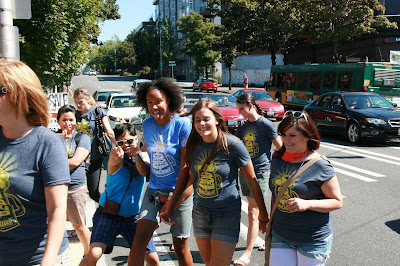 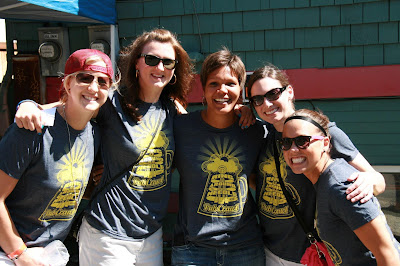 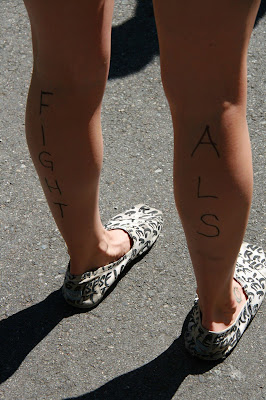 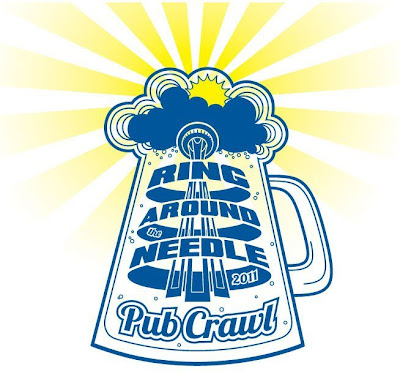 my favorite day of the year is almost here! the 3rd annual ring around the needle is this saturday and you still have time to sign up. 8 bars, 500+ people and endless amounts of fun and good karma. if you haven't signed up yet but plan to, make sure get there at 11:30am and register so you are guaranteed the right size t-shirt. just $40 online and $50 day of. bring a little extra cash because we are selling water bottles ($10) and pint glasses ($5) with the official event logo so you can continue drinking with me all year long! for all you out of townees; if you register by friday, if you register and tell me your shirt size, i will personally send it to you.

don't miss out!!!
see you at the bars and make sure to use a cab, bus or designated driver.
CHEERS!
Posted by Melissa at 1:21 AM No comments:

researchers find the cause of ALS!!!

as i ritually surf facebook before i fall into dreamland, i come across this link;

"researchers find cause of ALS".

i skipped to the next update like it was nothing...then it clicked and my eyes raced back up to the link that basically said "melissa erickson, you are a finalists in the bazillion dollar lottery!!!". i couldn't open the link. i froze. i can honestly say that i have never imagined that i would read this sentence in my lifetime. oddly enough, i just don't think about a cure or treatment at all because it's not on my agenda today and today is really the only thing i plan for. this little article forces me think about tomorrow. this is a gift and a curse. this article is staring me in the face. i take a deep breath, shrug my shoulders like Rocky against the Soviet, and do what i gotta do.

i made her read it... just in case when i clicked on the link, ashton kutcher popped on the screen and screamed, "you got punked, beeeeeotch!!!". jess read through it and confirmed that it is legit. that half of the chains that entraps my body quite possibly may be removed. i know, i am still trapped but the Marauder's Map may have been discovered! i feel like i and thousands of other prisoners, may live to fight this beast and our weapons were upgraded from a bitch slap to a machete! that one day i'll be able to wave my wand and say, "mischief managed". THIS. IS. HUGE!!! 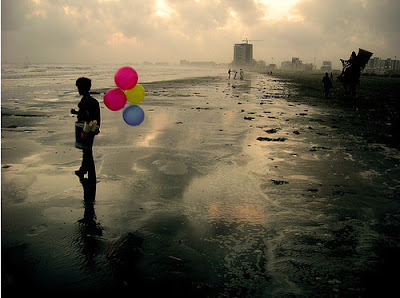 my friends are DOPE!

i love you guys!


www.ringaroundtheneedle.com
Posted by Melissa at 10:36 PM No comments:

musically taking over the world

i feel like these three can do no wrong right now. 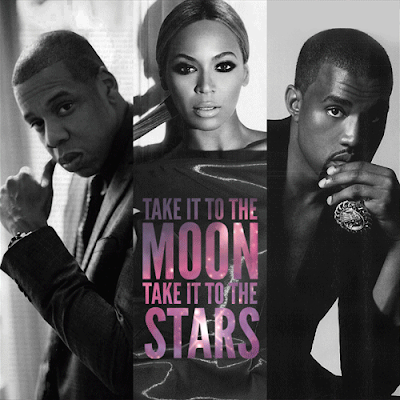 there are few people that can completely captivate me by sight and sound.
no doubt, Adele is quite possibly my number one. i was fortunate to see her perform at the Triple Door two years ago. she was new on the scene but performed beautifully.
fast forward to 2011, after learning my dear friend Swen secured tickets to last night's concert at Seattle's historic Paramount Theater, i was eager to hear her soulful voice again. as she took the stage (singing my absolute fav song, Hometown Glory) i sat back and was in my version of heaven. her stage presence was noticeably more comfortable than two years ago and she spoke and waived to each of us like she just had lunch with everyone earlier in the day. i truly believe that she absolutely adores her fans and enjoys interacting with her audience and giving us insight into her creative writing process.

i am sure i smiled throughout the entire concert.
i am positive that i sang along the whole time.
and i will admit that i even cried
(like ugly cried).
i'm ok with it because,

here's a little song to make you smile. 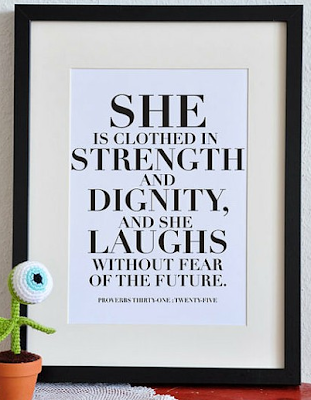 i'll get there,
one day.

people always ask me, "what is it really like living with ALS?" as honest as i can, i try to describe my day-to-day routine, what goes through my head and how my body feels. my family and friends who have known me preALS have witnessed first hand how my body has melted due to the inferno that is Lou Gehrig's Disease. i always wondered what it would be like to have a video camera following me 24/7 and be able to watch it at super high speed. would my muscles shrink as fast as a hummingbird flaps his wings? would people witness the colossal failure of my body and realize how unfair it is, that doctors searching for a treatment lack the appropriate funding because of how relatively unknown ALS actually is?

Tim LaFollette has ALS. Tim has a mission. Tim has more courage than anyone i know. and Tim has let a camera document ALS's war path over his entire body. Often Awesome is the award winning web series that documents Tim's battle with ALS. get to know Tim and his army of sparrows (you'll understand the reference soon) relentlessly fight to keep the upper hand in this unwavering war. currently there are 33 episodes released on You Tube and Facebook in the ongoing series. please visit my blog weekly for new episodes...