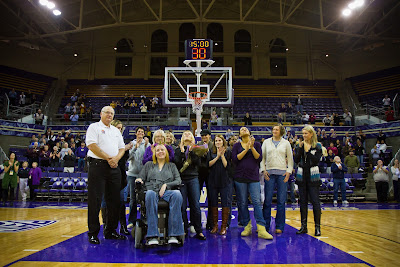 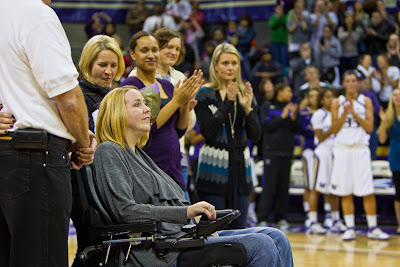 here are a couple pictures from wednesday night. i can't even begin to describe how special the night and honor was. my memories of the dawg days are unparalleled and extremely cherished. so to be asked to return and have another chance to step on the court at good ole' Hec Ed, i was nervously excited. it's funny, besides the first few games of my freshman year, i never became nervous at the thought of stepping on the court and becoming the center of attention. so why, on a night that a MVP performance could only be derailed if my wheelchair broke down, was i nervous to step on the same floor that i've flopped, sprinted and chest bumped on for four years?! i dunno either...but that's why i brought my teammates with me. as soon as i stepped on the court, i felt at home again and i couldn't stop smiling. the video and script was perfect. when i realized that both Coach McGuff and Coach Bonvicini were keeping their teams on the floor, i felt extremely special. the best part of the night was the best part of every game day. husky fans are like no other in college sports...well they actually share the same passion as any fan of their favorite college, BUT according to me (and it's my blog, SO) Husky fans are the greatest! so naturally the best part of the evening was sharing it with our loyal fans. whether they've been following the team for a year or since the program's first year, these guys love their Huskies. the love and applause i was showered with was amazing. it was the most perfect night and i am so thankful to Megan Osmer, Shannon Kelly, Elliott Silvers, and Colleen and R.B. Caulkins. thank you to the program and my teammates for the continued support. and thank you to my family for EVERYTHING.

i'll post more pictures and a copy of the video when it becomes available. it was so, so awesome...i'm still smiling.

We, would also like to thank you for all of your support, for honoring Melissa and for bringing a smile to all of our faces!
Joe, Leanne and Kristin